The tribe Mapuche is derived from is the Huilliche. The Huilliche lived in central and southern Chile as well as parts of Patagonia and became known as the Mapuche. The Mapuche had no known system of writing but were organized through a loose confederation of related family units mostly through the

The Mapuche while being a peaceful tribe would not hesitate to counter any threat from their neighbors such as the Incas.

They had established several colonies in Mapuche territory but met with resistance and had very little success with the conquest of the Mapuche nation.

The Spanish began their conquest in earnest around 1541 and continued until 1810 when the Mapuche wrested control of Chile away from Spain. Internal infighting led to the return in 1814. Chile and Argentina banded together to push the Spanish out of Chile in 1818. The new nation of Chile was comprised of Spanish descendants, immigrants from other European countries and the native population. This is often referred to as the mestizaje. Ten percent of the population is the Mapuche Indian. They make up a very large part of Chile.

September 18 is the national day of celebration of independence. There are celebrations all over the country, each showing a different part of the culture of Chile. Chile has the oldest government in South America that has lasted well over 200 years and is constitutionally based. There was a military coup by General Pinochet that lasted from 1973 -1990 when the military was overthrown and the constitutional government was restored. Chile has grown its people, economy and place in the world to where it is in the top 50 countries in the world and has the ability to lose its designation as a third world country.

The asado is a very important part of Chilean life. It is a time for friends and family to get together. The formal asado is for a celebration, a wedding, an engagement, a Holiday and is a time to tell stories and to interact with family and friends.

The grill (parrilla) is suspended above the fire or red-hot charcoal. Charcoal is the preferred method instead of fire or gas. The smokey flavor from the charcoal is what is preferred and can not be found in gas at all. Charcoal can be found in most Chilean supermarkets and come from a variety of hardwoods but pine and eucalyptus. The flavor from pine and eucalyptus are too strong and leave an acrid taste in the mouth. Chileans do not use any type of accellarant other than newspaper to start the fire for the parrilla.

How grilling came to be in Chile

Different Versions of Grills in Chile

You will find many versions of a grill in Chile. One version is a 55 gallon drum that has both ends cut out.There are hooks placed at various different levels to place meats at different levels to allow for a faster or slower cooking time and depending upon the meat. The end allows the grill master to place the barrel over the fire or charcoal. One of the favorites to put in such a grill is lamb.

Another version of a grill is empty air conditioning cannisters that have been cut in half and cleaned out thoroughly to get any possible contaminants out. A grill is then placed on the half cannister and is used for sausages and steaks. These are used at the beach on a regular basis.

They developed a dish called cazuela which is cooked in a clay pot that is wider than it is tall. Cazuela has alpaca (llama) meat, potatoes, onions, vegetables and is cooked in a hole in the ground that is roughly three feet deep and filled with hot rocks and fire. It takes several hours to cook.

The Mapuche word “curantin” means rock heated by the sun. Cuarantin is the root word for Curanto. Curanto is a traditional food preparation method that has been around for centuries. You dig a pit and fill it with hot rocks and place nalca leaves then layer seafood, meat, vegetables, clams, razor clams, potato cakes and potato dumplings. Keep doing the layers like this with the leaves and all of the items to be cooked until the pit is full. The nalca leaves are waterproof and are a great aid in steaming the curanto.This method of cooking has been around between 6,000 and 10,000 years. The oldest known curanto pit is estimated to be 8,000 years old and has clam and mussel shells in it.

Another favorite dish is the Parrillada which is different kinds of meats, sausages and entrails cooked over charcoal and served with potato salad.

Blood sausages are another favorite cooked on the grill. 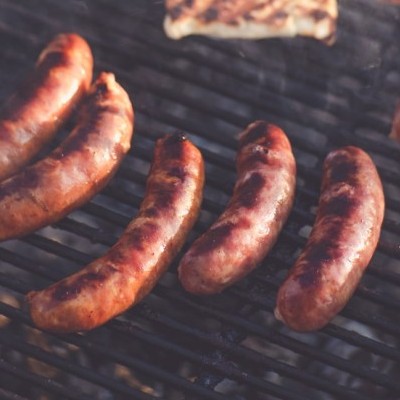 It seems that the most favored item to be grilled is the Completo Italian-Sausage hot dog. It is the Chilean style hot dog that is “loaded”. It has avocado, chopped tomatoes, sauer kraut, and mayonnaise all on a bun. Have plenty of napkins because it does get a bit messy

Seafood in grilled or boiled in Chile depending upon how close to the sea you are. This is mainly for the freshness of the seafood since Chile is not very wide. It is only a couple of hours drive to the shore or to a small town where the catch is brought to market.

Grilled shrimp are one of the most favored items to be grilled and as a result there is no shortage of recipes for grilled shrimp.

What did I cook? Paella. Here’s my paella recipe. Average pH of ingredients: around 6.0 – 6.2. Serves 4.Olive oil as needed1 medium onion, chopped1 – 2 cloves garlic, minced½ green bell pepper½ red bell pepper3 chicken thighs, boned (bones reserved) 2 smoked sausages, 4-5” long2 lbs. mussels1 lb.clams (mine were very small, more ornamental than substantive)1 ½ cups short grain riceThyme, paprika (AKA ají de color), saffron (if you have it, I didn’t)1 cup green beans or peas (frozen/pre-cooked)½ cup black olivesMinced parsleyClean mussels and clams, discarding any broken ones and those that don’t close. Reserve a dozen or so mussels, and steam the rest for 3-5 minutes in a cup of water until they open. Remove the meat from the open mussels and save the broth. Add 2 – 3 cups water and the chicken bones to the mussel broth (+ onion trimmings, parsley stems, etc.) and simmer until needed. Heat copper paila over a low flame until moderately hot (be careful, this won’t take long) add olive oil, chicken and sausages and sauté over low heat until brown. Remove meats and sauté onion, adding garlic and bell peppers after a few minutes. Then add thyme, paprika and saffron. Return meats to paila and add the rice. Sauté rice for 2-3 minutes, then add 3 cups mussel/chicken broth. Raise heat until the broth boils, then lower to a simmer. Cook without a lid for 15 to 20 minutes, tasting the rice for doneness from time to time (it should be al dente) and adding additional boiling broth if necessary. When about ½ the broth has been absorbed, add the reserved mussel meat and green beans or peas and stir. Then add the clams and mussels by pushing them into the rice. When rice is done, add olives and parsley, turn off the flame, cover paila with a lid, dish towels, etc. and allow to rest for 5 to 10 minutes. Serve with lemon quarters, salad and wine.