What is Argentine Grilling?

Argentine grilling is more than grilling. It is a tradition passed on from father to son. It is never deviated from. The gauchos(cowboys) were the first to introduce grilling to Argentina in 1536. The gauchos were mostly of Italian descent and so a great deal of Italian style flavor was added to the Argentine diet.

The Asado, Asador, and the Parrillo

Argentine grilling is called asado and the pit master is called an asador while the grill is called a parrillo. The asador is an honored position which is passed on from father to son. Some asadors can claim to have a lineage that literally goes back centuries. The asado is centered around beef. The asado does not begin until the asador arrives and inspects everything. I mean absolutely everything. He inspects the wood for the fire. He inspects the meats to be sure they are of the quality and the correct amount of meat for the asado. He inspects the parrilla to make sure it is in good repair and the correct size. Once the asador has completed his inspection and it is worthy then the asado may begin but not before. The asador assumes a leadership role from the beginning to the end.

The Fire for the Asado

Since the fire for the Asado is done open air, it is composed of hardwoods that have been seasoned to burn hot give off coals that will retain their heat for hours. The fire is traditionally built in an enclosure that is open on the front. If the asador has trouble lighting the fire he will use newspaper as a tinder to start the fire but will not use an accelerant like starter fluid. This adds chemicals to the fire that change the taste of the meat. The tools of the asador are rake, shovel and extra long tongs.

Once the desired embers or coals is reached, the asador will put the parrilla(grill) in place to begin the cooking process. The parrilla is placed about 6 inches over the coals to catch the best temperature for the thicker cuts of meat.

Some Common Meats of the Asado

If you are looking for the best meats for the asado then you need look no further than the grasslands of the Pampas. Argentinians prefer grassfed beef over any other. They eat approximately 160 pounds of beef per year where the people of the United States eat a mere 87 pounds per year.

The gauchos who followed the herds across the Pampas plains made their mark on how meat was grilled in Argentina. They brought their style of cooking and seasoning to the area. They cooked low and slow and had the tastiest and most tender meats the area had ever known.

If you are looking for the asado to be a quick event you would be sadly mistake. A typical asado will last hours.
The meats are all the best cuts. The meats will be cooked largest pieces first, then the next smaller cut and so on down the line but they are all cooked the same. All of them are cooked low and slow. The Argentines prefer their meat to be medium well to well done.

These cuts of meat include but are not limited to ribs, chorizo, black pudding, and sweet breads. Another two favorite cuts of meat are vacio(flank steak and entrana(skirt steak). These are both flavorful and work well on the parrillo.

As the meat is cooked, the flames are gone but the heat remains. The asadors of Argentina have devised a method where even if there is a flareup none of the flame touches the meat but burns off naturally. The reason it doesn’t touch the meat is the parilla grates have grooves on them to channel the fats and juices away from the meat thereby keeping the meat away from any flareups and keeping the desired flavor of the meat intact.

Vegetables on the Grill

Another type of food that is commonly grilled are peppers and vegetables.

chimichurri sauce to be used for dipping 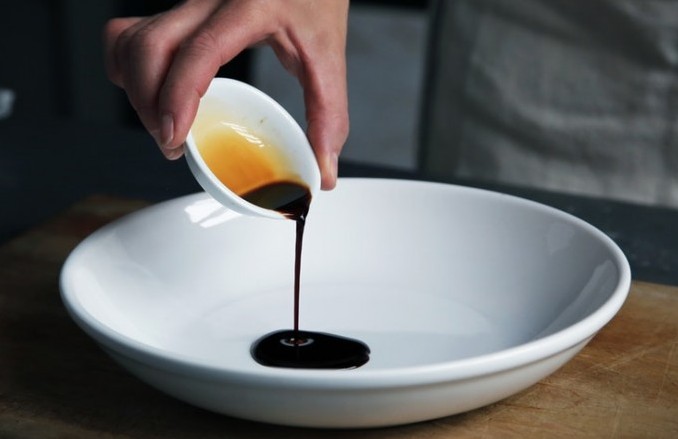 The entire meal on average has a little over one pound of meat per person. There are very few sides served at an asado. There may be a side salad consisting of tomato, oil and a white wine vinegar which pairs well with the meat of the asado. Do not be surprised if you get a round of applause. This is customary and besides you have earned the attention for a job well done.
There may be a chimichurri sauce as well.

bring water to boil in a small sauce pan

add salt and stir until dissolved

remove from heat and let cool

mince garlic finely and put in a medium bowl

mince parsley and oregano add to garlic and red-pepper flakes

will keep for at least three weeks

Please leave comments so that I may better serve you